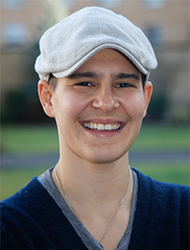 Mirit Markowitz, a student clinician at Bastyr Center for Natural Health, is presenting a series of cooking demonstrations in 2015 and 2016 with fellow student Kelsey Perusse. Learn more on our Events page.

Learn more about Mirit Markowitz in the following Q-and-A:

What was the path that led you to study nutrition and psychology at Bastyr University?

When I was an undergraduate at the University of Washington, I met a woman who was starting Bastyr’s Doctor of Naturopathic Medicine program with a certificate in midwifery. Over time she became my de facto doctor, and I found her to be really inspiring. Even though I had been studying art history and dance, I decided I wanted to be a naturopathic doctor and started taking pre-med prerequisites once I graduated from the University of Washington.

I took some time off before returning to school and moved to the San Juan Islands to work on a farm. That’s where I really fell in love with food and sustainability. I realized that whole food and mental health were my real passions, which is what led me to enroll in Bastyr University’s Master of Science in Nutrition and Clinical Health Psychology program.

I always knew I wanted to come to Bastyr — it seemed like such a magical place!

What are some of your clinical interests?

In my mind, I don’t feel like counseling and nutrition are separate. Your brain and your body are one and the same. In my own life I’ve noticed that once I change my emotional attitude about myself, my eating habits also change.

When I was 22, I got mononucleosis and as a result lost about 40 pounds. I went from always being just a little overweight to extremely underweight in month, and my entire body changed as a result. It was really eye-opening to feel so terrible and get so many compliments about how I looked at the same time.

Something changed in me based on that experience. I was able to let go of my inner critic when I ate, and I rarely struggle with emotional eating anymore. It really opened my eyes to the root stress a lot of my patients feel: trying to achieve an appearance that does not necessarily match up with what makes them feel the best on the inside.

I try to help my patients take that first step toward letting go of ideas about how they’re supposed to look and feel and move toward discovering what their body needs. It’s really about giving them the right intuitive knowledge – finding the abilities of a patient, then helping them take the next step because behaviors can change, you just need to know where your patient is at and what underlying issues might be getting in the way.

How did you come up with your talks for the Living Naturally series?

I think patients who come to a cooking demonstration are more likely to leave with some kind of information that can’t be imparted with a PowerPoint and a stack of handouts. Looking at and interacting with food makes you use something that isn’t your left brain, and I think that’s really powerful.

In the Bastyr University Medicinal Herb Garden, where we grow food for Teen Feed’s monthly dinners for homeless teens, I’ve noticed that the teens eat more vegetables when they found out that we grew them. There is a whole web of food and intention, emotions and energy that plays a big part in being a healthy eater.

What do you hope to do once you graduate?

I would love to teach classes on whole-food nutrition geared toward specific diseases, like diabetes or cardiovascular disease, in addition to general whole-food nutrition concepts. I would love to teach nutrition in areas where food access is not available, and incorporate sustainability concepts into that education. I also really hope to have a garden and my bike at the end of all of this — Bastyr has been quite the rewarding and rigorous journey.

To women here and around the world: Obsessing about how you look and what you are not is a way to keep you quiet and small. Be proud, love exactly who you are, and make changes so you can be your biggest self in this world. This is of upmost importance; we need each and every one of you.

Also, here’s a book of lists that I would recommend to anybody who is looking for more information about whole foods:

Markowitz will be giving the demonstration “One-Pot Anti-Inflammatory Meals” with fellow student Kelsey Perusse from 10:30 a.m. to noon Saturday, January 24, 2015. They’ll be back spring quarter with “Start Spring Fresh with Detoxifying Foods” from 10:30 a.m. to noon Saturday, April 11, 2015. All Living Naturally talks take place at Bastyr Center for Natural Health and are free and open to the public.

Has one of our providers, students, alumni or staff members made a difference in your care?

Share your Bastyr care story and acknowledge your care provider today! Tell us about a positive experience at Bastyr Center for Natural Health by emailing us at [email protected] or call us at 425.602.3355.

Bastyr University students are the caregivers of tomorrow!

Whether for scholarships, academic programs or research, every gift helps Bastyr students pursue the education that empowers their dreams. Visit Bastyr.edu/Support/Give.